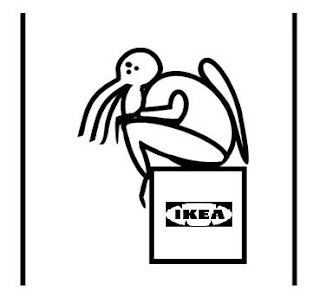 What if our collective trajectory was born of a subconscious covenant with a dreaming cosmic entity indifferent to our fate?

This possibility is raised in the correspondence between a ten year old Swedish boy from a farm near the village of Agunnaryd and a reclusive New England horror writer recently diagnosed with cancer. It is the summer of 1936; Keynes’ the General Theory of Employment, Interest and Money is published in the UK and Jesse Owens wins gold in Berlin

Taking letters exchanged between the young Ingvar Kamprad and a rapidly ailing H.P. Lovecraft as a starting point, H.A. Wilcox has curated a series of works by some 20 artists and writers at CPG and the surrounding park. This exhibition will deliver a set of works drawing on their shared interests in the material and augmented by a schedule of one-off outdoor events and performances taking place over the month of July 2013

The first I heard of what have become known as the Kamprad-Lovecraft correspondences was an email from a little known artist originally from Rhode Island and lately residing in London.  The anxiously tapped out message that arrived in my Duke inbox at 1am would ordinarily have been deleted by any one of my seemingly immaterial support staff, but on this occasion I had been woken by a nightmare whose strangeness precluded any further sleep. Seeking comfort in the familiarity of my inbox (that I habitually check, despite my 79 years) I began to mark the innumerable requests for conference addresses, journal submissions and PhD supervisions for immediate consignment to the virtual Trash to which we all eventually return.  My purge was interrupted by an email whose subject seemed to resonate uncannily with my then circumstances.

RE: Nightmares and the dystopian horizon of our collective praxis

Tired yet tethered to waking by some vague, subconscious anxiety, I read on.

Dear Professor Jameson,
I know you can’t sleep. Nor can I.

What followed was an account whose reliability I could scarcely credit. The sender, H.A. Wilcox, described himself as an artist/curator putting together a month long exhibition responding to a recently discovered set of letters, seemingly between the ten year old future founder of IKEA and a dying H.P. Lovecraft. Wilcox included a link to the letters and claimed they cast new light on what many describe as my seminal work - Postmodernism, or, the Cultural Logic of Late Capitalism. Evidently, his insomnia stemmed from what he assumed was our mutual anxiety for my intellectual legacy.

I followed the link to a sparse webpage that contained four scans of barely legible hand written letters, alternately raw and refined in script. Above the scans was an image of a forty-something bespectacled Goth, smiling with anxious triumph and clutching what closer inspection revealed to be an ancient edition of Weird Tales. Below, a caption informed me that the man was Sven Källström, bassist in the Sludgecore band Cyclopeanus and son of a Swedish smallholder. Apparently, Källström had discovered a time capsule of sorts buried in a shallow grave on his family’s farm in Småland, rural Sweden.

Tabbing back to the email, I sleepily scanned the text beyond the link for some compelling call to action, my index finger hovering above delete. And there it was - a garbled appeal to my intellectual vanity that piqued the residue of some long subdued, younger man within.

I hit reply and in the old dark of that sleepless night wrote a few paragraphs of speculative critical writing which, on reflection, strike me like irregular cubes of broken shatterglass in the oatmeal of my intellectual dotage. The results seem alien as I read them back; a choir of discordant voices orphaned from the logic of dreams.  Perhaps I was in thrall to the dream from which I had lately woken. Perhaps I was still asleep.